Go on, admit it. Everyone has one—or two, or three guilty-pleasure reality shows. If you’re moving towards marriage, it’s easy to get wrapped up in the drama of wedding-based shows, like The Bachelor or Say Yes to the Dress, or in steamy romances that sometimes inadvertently develop, like on Survivor. 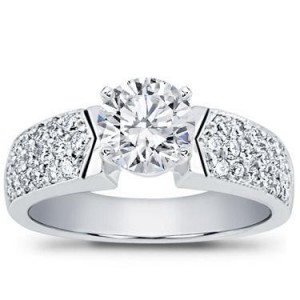 Along with having some of the shortest engagements in television history, many proposals born out of matches from The Bachelor and The Bachelorette feature pave engagement rings. In 2011, J.P. proposed to Ashley with a ring encrusted with 162 round cut diamonds set in the pave style. Brad outdid J.P. when he proposed to Emily by giving her a 3-carat ring with 263 pave diamonds. However, they called off the engagement just three months after he proposed—proof that cost does not equal commitment!

A bride-to-be from Say Yes to the Dress Atlanta favored the pave engagement ring style, too. Brandie Gowen from last season received a cushion-cut diamond from her sweetie. The beautiful center cut diamond was set in what she described as an “antique-style band” that was created using yellow gold and pave diamonds. 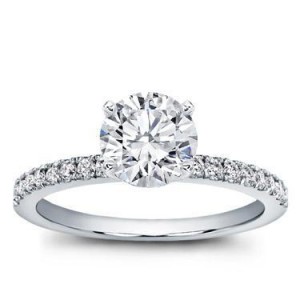 Remember Amber and “Boston Rob,” the lovers who forged an unbreakable alliance that took them to the final two in Survivor: All Stars in 2004? It seems that even this dynamic duo isn’t immune to the reality-TV/pave engagement ring link. At the show’s season finale, Rob proposed with a white gold ring that featured a 1.31 carat diamond surrounded by dozens of smaller pave diamonds. Not too shabby for a romance that started on a deserted island!

The best part about “reality” TV is that ultimately it’s just a fantasy, and it’s real life that the stuff of dreams is made of.  Luckily, pave engagement rings are part of real life and can become a dazzling reality for you and your loved one. Adiamor has plenty of sparkling stunners for you to choose from, like this pave beauty.

Unique Engagement Rings: How to Fit the Ring...