Diamonds can be cut in a wide variety of styles. As the technology of diamond cutting advanced through history, cutters were able to improve light return of diamonds, as well as experiment with different diamond shapes.

Humans were originally unable to cut diamonds at all. Sometimes diamonds were placed in jewelry in rough form, as they came out of the ground. The Romans actually believed that cutting a diamond would cause it to lose its mystical power of protection over the wearer. 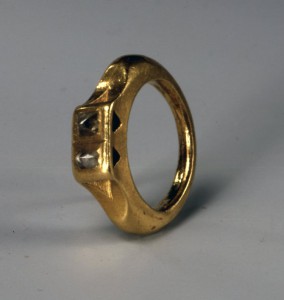 Ancient Roman ring with two uncut diamonds. Photo Courtesy of The Trustees of the British Museum.

Eventually people figured out that diamonds themselves could cut and polish other diamonds, and rudimentary cut styles began to evolve. One of the first cuts to become popular was the rose cut. This cut has facets which rise to a point on the top of the diamonds, while the underside is flat.

In the 1700s and 1800s when the bountiful mines of Africa were producing an immense amount of rough, diamond cutting took on a different role. People tried to make diamond shapes that reflect light and look beautiful in jewelry, developing the brilliant faceting style. The cuts that took precedence in this time included the Old Mine and old European cuts. These cuts were the precursors of the modern diamond cuts of today. The old mine cut developed into the cushion cut, and the old European was the predecessor of the modern round brilliant cut.

Around the turn of the century, diamond cutting technology took a major leap forward. The modern round brilliant cut was developed, which created so much fire and brilliance it became the most popular cut for the past century.

The Asscher and emerald cuts developed in the early 1900s reflected the geometric design ideals that defined the Art Deco era. These step cuts do not have as much flashy sparkle as brilliant cuts, but instead create hypnotic reflections, drawing you into the diamond. 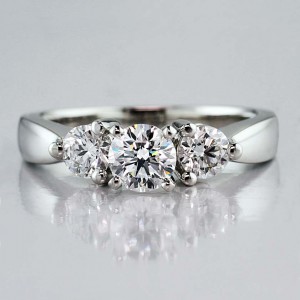 Once the brilliant style of cutting was found to reflect so much light and create so much sparkle, people began to experiment with different shapes of brilliant faceting. During the twentieth century, cutters elongated the round to create ovals, formed square brilliants which became princess cuts, and cropped corners off those squares to create radiant cuts. Hearts, pear shapes and marquise cuts were other evolutions of brilliant cut diamonds.

Some cuts create certain visual effects. Rounds face up the largest and reflect the most light return (this makes sense if you think of a circular room full of mirrors; it would reflect more light than a room of any other shape). Any elongated shape also utilizes its carat weight well and appears large. Elongated shapes include rectangular radiants, emeralds, marquises, pears and ovals. 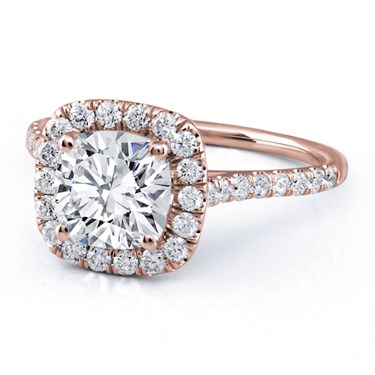 Cushion Cut Diamonds have vintage appeal, but can appear smaller than the Round Brilliant shape

One shape which carries a lot of its weight in its depth, not its spread, is the cushion cut. While they give an old world, vintage-feel which attracts many, they do not appear as large as round brilliants of the same carat weight. For those who value the cushions’ pleasing shape and historical appeal, appearing large is not a priority. For those who want a diamond which spreads weight out more and looks larger, a different cut might be the right choice.

What You Need To Know: Cushion Cut Diamonds