Known around the world for its green color, the emerald is a precious gemstone. This gemstone gets its famous green coloring from the mineral element chromium. Like other gemstones, the emerald is highly sought after for making fine jewelry. One of the reasons is that emeralds rate between 7.5 and 8 on the Moh’s Hardness Scale. In addition to its rich coloring and desirable hardness, emeralds also have an ancient history with romantic roots. Seeing as the emerald is May’s birthstone, we have put together a brief history of this gem.

The Ancient Roots of the Emerald

Today, emeralds are mined in Colombia, Brazil and Zambia. Colombia harvests more than half of the world’s emeralds, including up to 95% depending on the year. However, ancient cultures mined for emerald gems as early as 1500 BC in both India and Egypt. Egyptian rulers wore jewelry adorned with emeralds, perhaps none more famous than Cleopatra. Additionally, both Greeks and Romans believed the emerald possessed great powers. In fact, the ancient Romans associated the emerald with the goddess Venus. This connection to romance is part of the widely held belief that emeralds bring both passion and unconditional love. 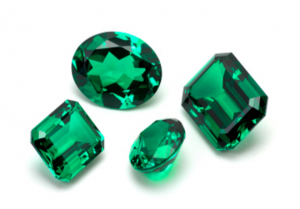 Just like diamonds, emeralds are grading on the four C’s: cut, clarity, color, and carat weight. However, emeralds are often highly included. This means the clarity of May’s birthstone is not graded under 10x magnification; instead, emeralds are graded by the naked eye. Although inclusions can greatly affect how light passes through the gemstone, emeralds that appear to not have any inclusions to the naked eye are considered flawless. In addition to interior inclusions, many emeralds often have surface cracks known as fissures. To maximize the value of emeralds with inclusions, they are often treated with cedar oil. Just like diamonds, the inclusions of an emerald are helpful in identifying each stone as these inclusions are unique.

Although the diamond is the most common gemstone used for fine jewelry, emeralds are a popular choice as well. Emeralds can be used to make earrings, pendants, and even engagement rings. However, because of their inclusions, emeralds are not often cut with facets. Instead, emeralds are more frequently shaped and polished. Nevertheless, when emeralds are cut, there is a signature cut that is used. Known as the emerald cut, it is a rectangular cut with facets around the top edge.

Emeralds are beautiful gemstones, and they make for great pieces of jewelry for that special someone born during the month of May. Check out the Adiamor glossary to learn more about emeralds today, or contact us today to have all your gemstone questions answered!