The macabre stories and legends surrounding the supposedly cursed Hope Diamond have become hopelessly intertwined with its factual history throughout the years. However, in the spirit of the coming Halloween holiday, we’ll stick strictly with the spooky stuff…

Jean-Baptiste Tavernier came into possession of the richly colored “violet blue” diamond in 1653. The legend goes that he plucked the 115.16 carat diamond from the eye of an Indian idol. When the monks discovered the theft of their precious gem, they placed a curse on the diamond so that whoever should own it, or even come into contact with it would suffer serious misfortune, or even death. Tavernier himself is said to have gotten extremely ill after he stole the diamond and later, violently torn apart by a pack of wolves in Constantinople during his retirement to Russia. Other accounts have Tavernier living to old age and dying peacefully at 84 years old, however neither story has been authenticated. 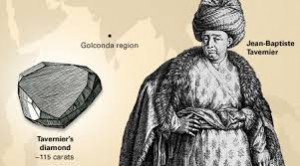 The Tavernier Blue, as the Hope Diamond was called at the time, was sold to King Louis XIV by Tavernier himself. The king had the diamond recut in 1673 to improve its color and

appearance, and the diamond became known as the “French Blue”. King Louis later died of a gangrenous infection, and every legitimate child of his except one all died during their brief childhoods.

Later, King Louis XVI and Marie Antoinette inherited the French Blue, and their young lives ended at the guillotine during the French Revolution. Marie-Louise, the Princess de Lamballe, a member of Marie Antoinette’s court and closest confidant, once wore the diamond and was later ripped apart by an angry mob, decapitated and disemboweled; later her head was impaled on a spike and set outside of Marie’s prison window.

The diamond, along with the rest of the French Crown Jewels, was stolen during the rioting and chaos of the Revolution. While the Crown Jewels were eventually recovered, the French Blue disappeared for 20 years. The next in a long line of grisly deaths was Wilhelm Fals, the Dutch jeweler who recut the diamond when it reappeared in England two decades later. The jeweler was murdered by his own son, who then killed himself. Later, financier Henry 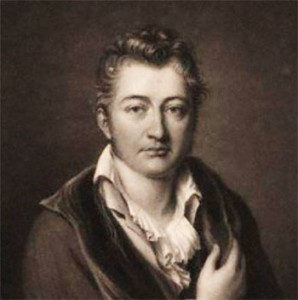 Philip Hope bought the recut diamond in 1839, and renamed it the Hope Diamond. His descendant, Lord Francis Hope was ruined financially after a lifetime of indulgences, and was forced to sell the diamond to pay his debts- he died, broke and alone.

The diamond traded hands many times for the next few years, leaving behind a trail of death and destruction. Among the many owners who owned it were Simon Frankel, a jewelry broker from New York, who bought the diamond in 1901, and suffered severe financial difficulties throughout the Depression. The next owner, Jacques Colot, went insane and committed suicide. Prince Ivan Kanitovski owned the diamond after that, but was murdered by Russian revolutionaries… his paramour Mademoiselle Lorens Ladue borrowed the Hope Diamond from her lover, Ivan, who murdered her in a fit of passion. The next owner, Simon Maoncharides, a Greek jewelry broker, drove his car off a cliff, killing himself, his wife and all his children. 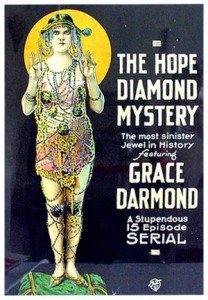 The Curse of the Hope Diamond Movie Poster

Many others perished after owning the diamond, but perhaps its most famous owner, Evalyn Walsh McLean suffered the most tragedy. Before owning the diamond, it was said this heiress lived quite a charmed life. Upon purchasing the diamond from Pierre Cartier in 1912 however, her life turned to ruin. Whilst in her possession, she wore the diamond everywhere, and there are stories that she even had the diamond fixed to her 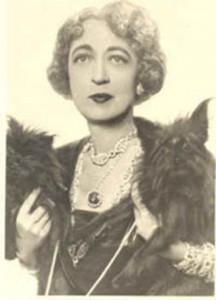 beloved dog’s collar, who then wore it around the apartment. Tragically, her mother in law died, and then her 9 year old son died in a horrific automobile accident. Next, her daughter died of a drug overdose at 25 years old, and then her husband left her for another woman, only to wind up in an insane asylum. Mrs. Walsh was eventually forced to sell her family’s newspaper, The Washington Post, and then died shortly after her daughter’s death… perhaps of a broken heart, destitute and alone. Evalyn’s surviving children sold the diamond to jeweler Harry Winston. Not even a decade later, Winston mailed the diamond to the Smithsonian for $2.44 in postage and insured for $155.00! Very mysterious…

The mailman who delivered the diamond may have been the last to have been directly touched by the Curse. His name was James Todd, and shortly after delivering the diamond, his leg was crushed when he was hit by a truck, and his wife and dog died not long after that fateful day. In addition, he lost his home in a tragic fire.

Today, it would appear that the curse of the Hope diamond lies dormant. The diamond resides at the Smithsonian museum with no current reports of tragedy befalling 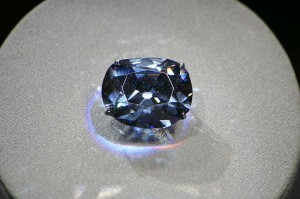 Hope Diamond at the Smithsonian

the museum workers there. It may be that the diamond isn’t cursed at all, and many of these accounts, such as that of Tavernier have not been authenticated, however, it would behoove any caretaker of this bloody and beautiful gem to be very careful indeed…

Good information. Lucky me I came across your blog by chance (stumbleupon). I have bookmarked it for later!

An outstanding share! I’ve just forwarded this onto a friend who has been doing a little research on this. And he actually bought me lunch because I stumbled upon it for him… lol. So allow me to reword this…. Thanks for the meal!! But yeah, thanks for spending time to talk about this subject here on your internet site.