Home Education What are the Most Cursed Diamonds in the World? The Orlov Part 2
Education

In the spirit of the spookiest month of the year, we are running a series of articles exploring the world’s most cursed diamonds. This post is devoted to the infamous Black Orlov Diamond, and its counterpart, the White Orlov. Both diamonds were said to have been stolen from the eye of an Indian idol, but only one of them has been involved in multiple suicides…

There are two historical diamonds associated with the name ‘Orlov’ and each has its own complicated history and supernatural legends. The White Orlov diamond has a rich and varied history, much of which is shrouded in legend. While not ‘cursed’ in the way that brings bad luck to its owner, this diamond has mystical associations and its ownership has been fraught with deceit and drama. The Black Orlov diamond is a black diamond whose history shows remarkable similarities to the white Orlov, but has a more classic curse which brings death and misfortune to all who possess it. It is also known as the Eye of Brahma.

The white Orlov is now part of the Diamond Fund of the Moscow Kremlin. The Kremlin

lists it as weighing an incredible 189.62 ct, but this is technically an estimate as it has not been officially weighed for many years. It is cut in a modified rose-cut, and it’s shaped has been described like half an egg. The cut features a flat back, with facets rising up to a point in on the top of the diamond. This was how most diamonds were cut before many of the modern cut styles were developed. The Orlov is one of the few historical diamonds that has not been re-cut in a more modern brilliant style.

There are many myths surrounding the Orlov’s origin and history. One story is that the diamond was once an eye in a statue of a deity in southern India. The statue was located in the heart of a private, secure temple with seven enclosures. No Christian was ever allowed past the fourth enclosure. A French deserter supposedly gained access to the inner temple by pretending to worship there for years. Once he had proven himself and was able to enter the center enclosure, he stole the diamond. Around 1750, the deserter fled to find protection and a buyer with the British army. Whether this origin story is true or not, the diamond was originally from India and did come to Europe in the mid-1700s.

The diamond passed through the hands of many merchants, and eventually found itself in Amsterdam, where Count Grigory Grigorievich Orlov purchased it. This owner gave the diamond its name. Count Orlov ended up giving the diamond to Catherine the Great of Russia in an effort to regain her affections after she ended their years-long affair. She had her royal jewelers create a scepter which prominently featured the Orlov diamond. It has stayed in this setting until today.

The Black Orlov diamond’s story follows a similar trajectory. The following are several 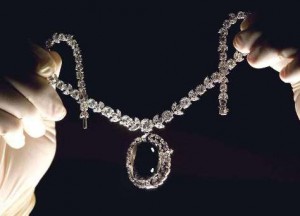 stories about the diamond’s history. Its journey started in India, where it was said to have be an eye in a statue of the Hindu deity Brahma (hence the alternative name “The Eye of Brahma”).  It was stolen from a temple in Pondicherry by a monk. This way of removal from the temple is supposedly what caused the curse upon any owner of the diamond.

Statue of Brahma, courtesy of kings 1912

Eventually the diamond came into the possession of the diamond dealer J.W. Paris, who committed suicide in New York, shortly after selling the precious jewel. Later, in the 1900s, the diamond was owned by two separate Russian princesses, Leonila Galitsine-Bariatinisky and Nadia Vygin-Orlov (who gave the diamond its current name). They both ended up committing suicide after owning the diamond. Each suicide was eerily similar, as they all involved leaping to their deaths from the top of a tall building.

Before you get too upset about all these deaths, keep in mind these stories of the Black Orlov are just that, stories. There are conflicting reports stating that there was never any Russian princess with the name Nadia Vygin-Orlov. Leonila Galitsine-Bariatinisky died of natural causes in 1918 at 102 years old. The myths surrounding famous diamonds are almost always exaggerated and enhanced as the fame of the diamond grows.

The Black Orlov was recut to its current size of 67.5 carats in the mid-1900s under the ownership of Charles F. Winson. It now has a more modern cushion-like shape. The diamond is owned today by Dennis Petimezas, who says he is “pretty confident” the curse is broken, and he has no fear of it. The Black Orlov is often displayed museums like the American Museum of Natural History and the Natural History Museum in London. 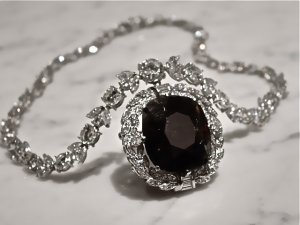 What You Need To Know: Cushion Cut Diamonds