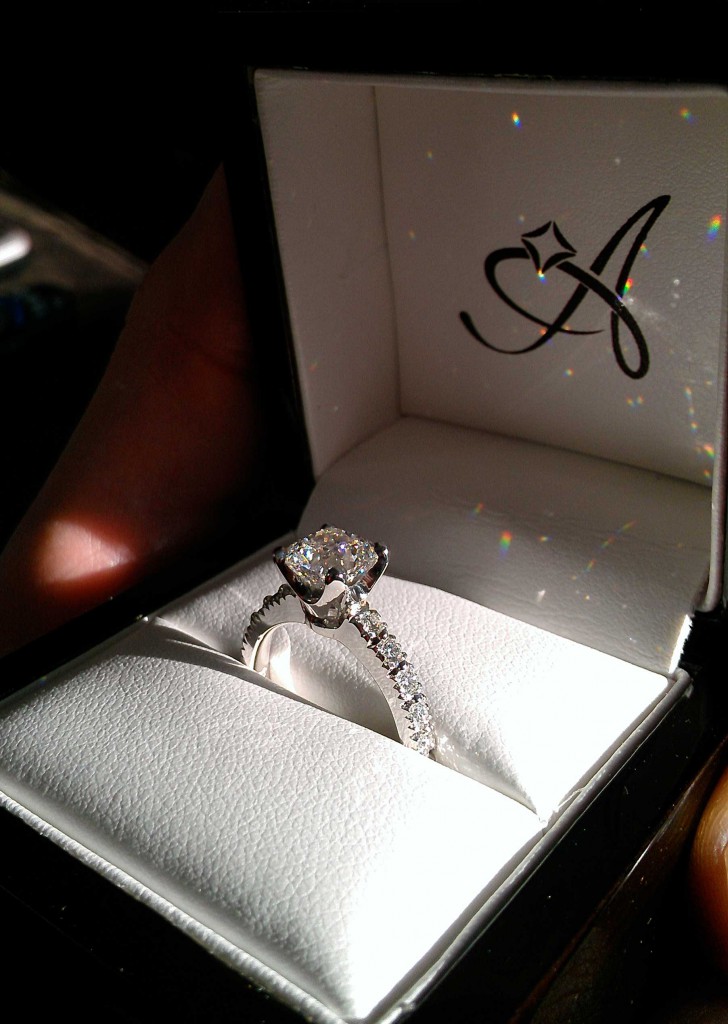 We just received these lovely pictures from one of our wonderful customers! Lawrence proposed to his beautiful fiance this past New Year’s in a British country house- on the same couch where they met 3 years earlier! We couldn’t ask for a more adorable couple or a more beautiful ring. 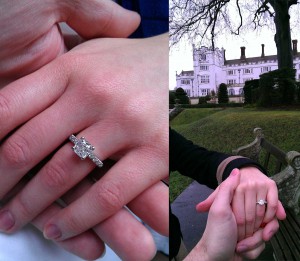 R2900 in platinum with a cushion cut diamond which was around 1.50 ct on her hand.

Here is their story in Lawrence’s own words:

My fiance and I work for the same company, her in the London office and me in NJ.  Just over 3 years ago, we met for the first time and really connected the next day on a company retreat to the Danesfield House in Marlow-on-Thames.  The entire division had a cocktail hour and a sit-down dinner.  When it was over, we all enjoyed drinks until later in the night.  At one point we found ourselves alone on a couch while everyone else was sitting in a circle together on the opposite side of the room.  We of course were called back to the main group but began dating shortly after.

Fast forward to this past New Year.  I knew I wanted to propose to her at the Danesfield House on the very same couch.  They were hosting a New Year’s Eve Black & White Gala so I only told her we were going to a B&W Gala event but didn’t say where.  I arranged for a cab to pick us up and instructed the driver not to announce the destination.  I knew she would figure it out along the way at some point and she did – she said her heart jumped.  We attended a champagne reception in the room with our special couch and then moved to another for dinner.  However, I noticed they intended to bring us back into that room to bring in the new year with live entertainment so I had to ask her before dinner concluded.  I lured her back to the room to check on the champagne we ordered and on the way back to our table for dessert I asked her to sit on our couch for fun.  I said a few words and then – one of the staff walked by and asked if we were OK and needed help!!!  After shooing him away, I finished what I wanted to say and asked her to marry me, to which she said yes.  She later said she was always a bit nervous about not liking her engagement ring when her day came but she was absolutely thrilled with it and couldn’t stop smiling.  She is getting amazing compliments from everyone who sees it. 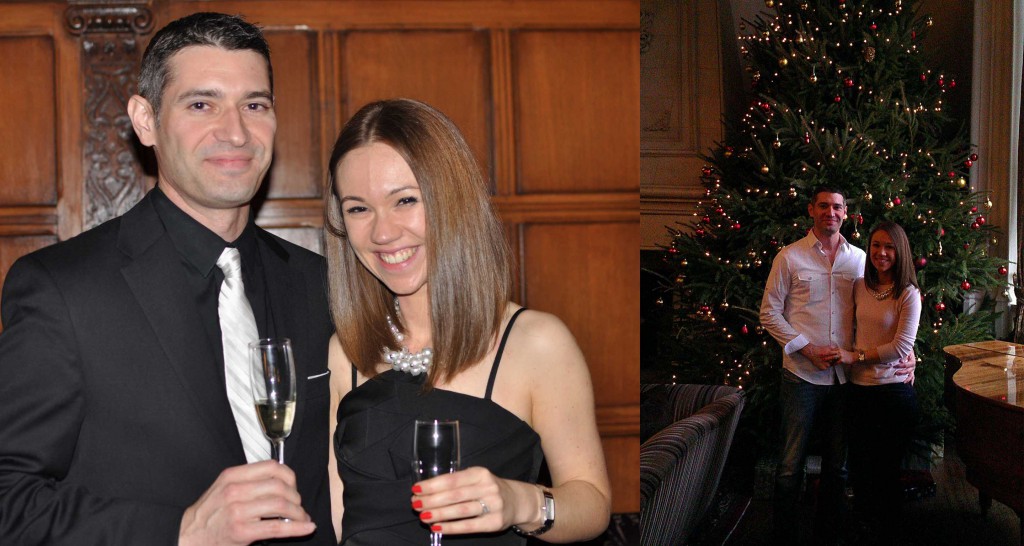 A New Year’s Engagement in England.

Thank you for sharing your pictures and adorable proposal with us, Lawrence! We are so happy to have been a part of your story.

Out With The Old, In With The New: What Do I Do With My Old Diamond?

Styles We Love for Valentine’s Day!

Signs That She Is Ready For You To...

How To Plan The Perfect Spring Proposal

Getting Ready For Your Valentine’s Day Proposal

Ringing In The New Year With A NYE...

Preparing For Your Holiday 2017 Proposal

Should You Get Engaged on Halloween?