Whether you are selecting a diamond for a solitaire engagement ring or another piece of jewelry, it never hurts to learn a little more about the history of this precious stone.  After all, you should ultimately be giving this piece of jewelry to someone you have a history with and truly love.

Like true love, diamonds are rare, timeless, and tough.  Did you know that a diamond is the only precious stone that is resistant to scratching from any other source?  Rubies and sapphires come in second, and topazes third.  These other precious stones can be scratched by a diamond, but they can’t scratch diamonds themselves.

So, there is a clear reason why these gemstones continue to be a popular symbol of eternal love,—they are beautiful and tough at the same time, as true love ought to be.  That is why the simplicity of a solitaire engagement ring is a great choice to proudly display such beauty and strength.  With this, here are a few more interesting diamond facts:

Diamonds Are a Form of Carbon

Did you know that diamonds are made of carbon?  In case you don’t recall, carbon is the same element that makes up 18% of your body.  It is one of the most common elements in the world and is necessary for human existence.  Coincidence?  We think not! Just think…without them, what would life be like?

Pure carbon is found in three forms of nature: diamonds, graphite and fullerite.  Graphite is a dark material (no.2 pencil, anyone?) much softer than diamonds. Fullerite, which was just discovered in 1990, is a molecular compound that has a perfectly spherical formation (see cool looking image below) 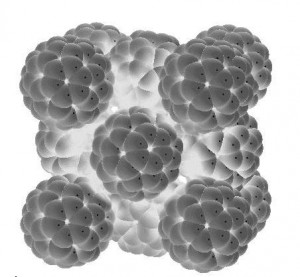 How Diamonds are Formed in the Earth’s Mantle

Diamonds were very particular about how they first came into existence, back before humans roamed the planet.  They came to exist under the most stressful, time-consuming, and violent earthly circumstances.  They were originally located (and some could still be) 100 miles underneath the earth’s surface, which is called the ‘mantle’.  In order for a diamond to form, the pressure on carbon needed to be about 435,113 pounds per square inch. This pressure came from overlying rock, and as if that wasn’t enough, the mantle temperature needed to be above a piping 752 degrees Fahrenheit.  If the pressure or the temperature fell at a temperature below this, graphite was formed instead.

How Diamonds Came to the Earth’s Surface

There is no way for any human being to dig to the earth’s mantle and make it out alive.  Luckily, nature had a way of doing the “impossible” work for us in the form of magma eruptions.  These are like volcanic eruptions but much more armageddon-like.  When the magma cooled on the earth’s surface, it left behind what is called ‘Kimberlite’ – the rock which contains diamonds (see image below). 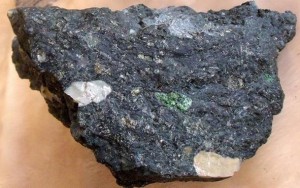 Diamonds are also found in riverbeds, which are called alluvial diamond sites.  These diamonds also came to the surface via magma eruptions, but got moved around by subsequent geological activity.

Where Diamonds Are Found Today

Today, most diamonds are found in Australia, Borneo, Brazil, Russia, and several African countries like Zaire and South Africa.

So, when you buy your sweetheart a diamond solitaire engagement ring or other piece of jewelry, remember that like true love diamonds needed very specific conditions to form.  If any one thing had gone wrong, the result would have been… graphite. So, don’t let your expression of love turn into something it shouldn’t   Choose the best of the best from Adiamor’s hand picked selection today.

Unique Engagement Rings: How to Fit the Ring to the Personality of Your Bride-To-Be

What you need to know: Cushion Cut Diamonds...

3 Reasons You Should Choose A Solitaire Engagement...

Lab Diamonds—What You Need to Know

How To Take The Perfect Engagement Ring Photo!

Are Asscher cut Diamonds Expensive? What you Need...

Hi there! Do you use Twitter? I’d like to follow you if that would be ok. I’m definitely enjoying your blog and look forward to new updates.

I really liked your post.Much thanks again. Great.